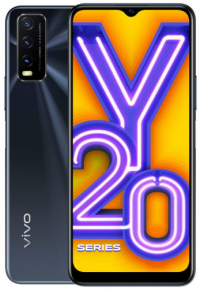 Vivo Y20 smartphone was launched on 26th 2020 august. The phone comes having  a 6.51-inch touchscreen display with a resolution of 720x1600 pixels. It comes  with 4GB of RAM. The Vivo Y20 runs Android 10 and is driven by a battery that is 5000mah. The Vivo Y20 supports proprietary fast charging.

basic info
General
Connectivity
Display
Body
Camera
Battery
Performance
Other Features
No images / videos for this content
Write a Review No ratings yet
Disclaimer : The price of vivo Y20 is BDT 14990. vivo Y20 Price in Bangladesh is updated daily from the price list provided by local shops and dealers but we can not guarantee that the information / price / vivo Y20 Prices on this page is 100% correct (Human error is possible), always visit your local shop for exact cell phone cost & rate. vivo Y20 price Bangladesh.